First let me say that as a motivation tactic I like to throw away the keys to new padlocks I get. Knowing there's no other way that I'll ever see that lock opened again other than to pick it has a strange effect on me. As though the lock is taunting me. Laughing at me for not knowing it's secrets.

I don't stand for inanimate objects taunting me.

I love the Masterlock #532. I love the solid body design, I love the weight it has, I love the perfection of the milling, I love the color, the fact that it will stay warm for quite a while after I've spent an hour or two trying to pick it open. I love this lock. 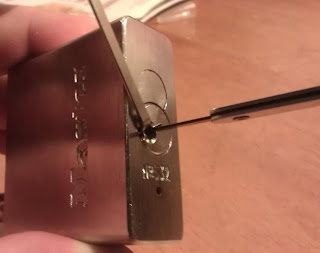 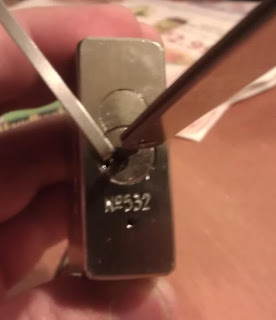 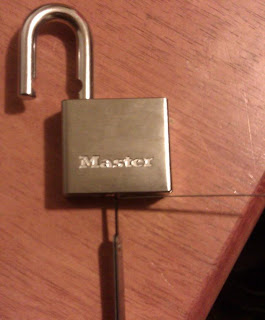 Used a half diamond pick, regular tension wrench, and the lightest possible touch.

Getting the balance between going light on the tension wrench and having enough pressure on it to start turning the cylinder is a trick all in of itself. It uses the dual ball locking mechanism, the spring is pretty heavy.

It also has a security pin(s) in there. I haven't taken it apart yet to verify what kind it is or what position it's in but that's what I read about it online anyways.

I THINK I may have had it one time earlier in the night raking it with a rake pick. It's kinda hard to tell when you have it open because it will shift slightly when you set everything except the security pin and you just have to put more pressure to try and turn the cylinder, which is in direct contradiction to using the lightest possible touch on the tension wrench.
More practice should make it easier to detect.
Posted by blakhal0 at 3:53 AM