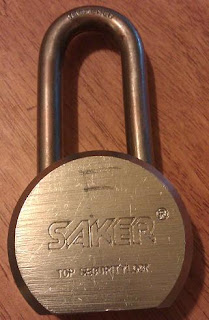 I've been struggling with this lock for quite some time now. I even took it to Defcon to the Lock Pick Village and had one of the Toool members take a crack at it and give me some advise on it. They couldn't open it either. They did give me some solid advise on attacking serrated and spool pins through a slow and meticulous approach.

This is 1 of 2 locks left standing out of the batch I picked up from Ebay a while back. The Abus diskus is the other lock I have yet to defeat. I've been working on both of them for quite a while now, I think the Abus will fall soon.

I'd taken the Saker apart in the past and noticed a bit of slop behind the cylinder between the release latch and the cylinder that I thought I might be able to use to make a bypass for this.

I finally got around to it yesterday and made this:
It doesn't look like much and it will only last for about 5 openings tops I assume but it gets the job done.

I used a piece of spring steel from windshield wiper blades and a Dremel to grind it down, then some 100, 220, 320 sandpaper.
The narrow part is about 1/16 of an inch wide, small enough to turn in the keyway of the lock cylinder.

Here's how everything fits together.

You can remove the plate that keeps the lock cylinder in place by opening the lock and unscrewing this screw at the bottom of the shackle hole.

This is the cylinder, notice the protruding portion. When the pins are aligned properly at the sheer this turns which then kicks over a release latch (see below)

The bypass tool can go all the way through the cylinder, fit in between the extended portion of the cylinder and the release latch.


Here's some pictures of the cylinder and the bypass tool. 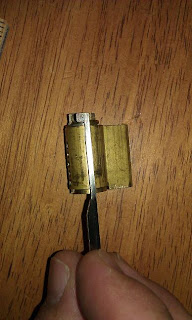 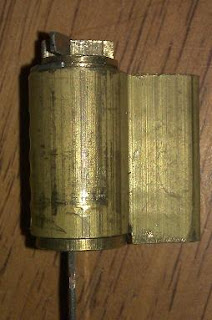 And here's the finished result. Insert bypass, twist with a pair of pliers, and viola... 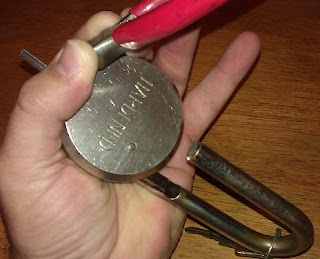 Now, I've been told that this is a knockoff of an American brand lock (5000 perhaps?). Which I'm sure is probably true, I haven't had the opportunity to see one and I have no idea if this same bypass would work on it.

I still won't be satisfied until I can open it with real picks, but it's always nice to have an ace in your pocket.
Posted by blakhal0 at 5:28 AM