So while I was out picking up some material for a project I happened to run across this padlock. 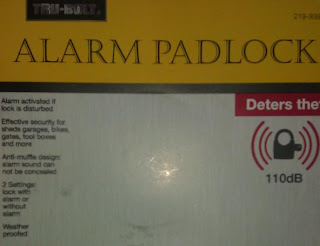 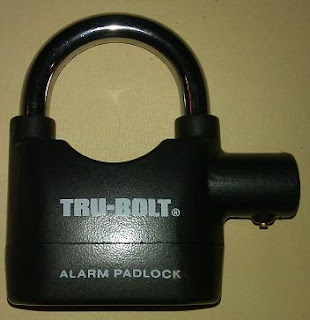 I thought to myself, well, it has an unusual key, it has a tamper alarm, it's about $12... I need to play with this right now.

After reading the write up it has on it's packaging I was very excited to begin attempting to defeat this lock.

Here's what Tru-Bolt has to say about it's product: 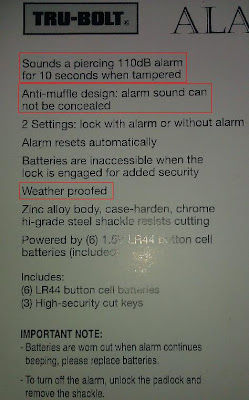 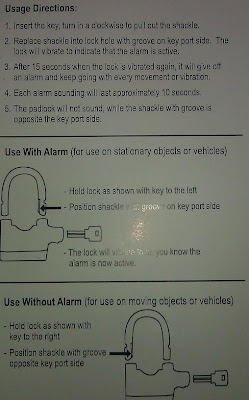 This is the keyway and key, not much room to get a pick in there.: 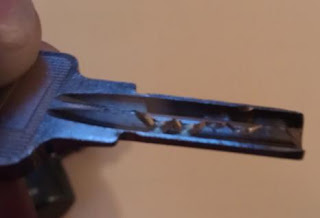 I thought that perhaps I had found a decent lock with a novel idea at a decent price.

This is what happened when I opened it the second time: 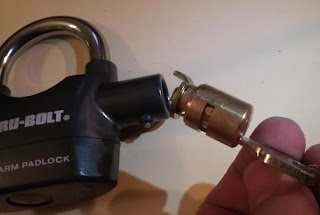 I turned the key and then the whole lock plug came out.

This here is the only thing that holds the lock in place: 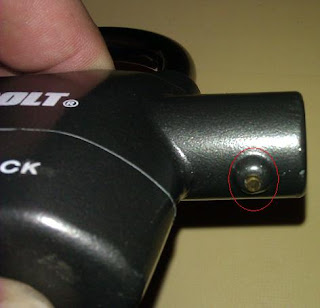 It's not tapped and threaded to lock it in place, it's not even glued in place, nothing, just rammed in there. Here's the corresponding  spot on the lock where it gets inserted: 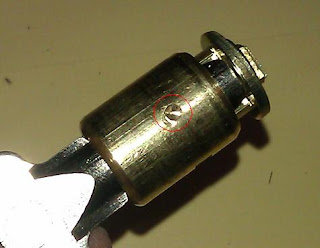 That's not a particularly deep drilling point, it doesn't mushroom out at the top, it's actually tappered to a point at the lowest spot. There's NOTHING to actually keep that pin in it's place. Since that's the ONLY thing holding the lock plug in place that causes a bit of a problem.

I was pretty disappointed at that moment, this intriguing challenge ruined because some knucklehead didn't think about securing that pin.

Spirit bent but not broken I carried on with the dissection of the lock.

There is still the actual lock and the alarm.

Since the lock itself is essentially useless I put that on a back burner for later and went about finding out how this tamper resistant portion worked.

Let me start by saying that 110db (if that's actually how loud it is) is pretty damn loud. Ear splitting "OMG the earth is ending" loud. Needless to say the novelty of it going off did not extend to my family while I was playing with it. It was suggested that I make it stop doing that if I were to continue to occupy the house.

Here's the internals of the alarm.

Here's the bottom housing of the lock. It only holds the speaker, the contacts there connect to the battery pack and electronics that are housed in the lock body. It's attached by 2 screws that are accessible when you remove the shackle.

This is the battery pack, housing for the circuit board, and contacts that connect to the speaker. It's held in place by a large O ring that is pressed into a groove around the battery pack device and the lock body. This also helps weather proof it.

Here is the ball for the switch that either enables or disables the alarm, it's a simple contact switch housed in a rubber / silicone housing inside the lock, above the battery pack. 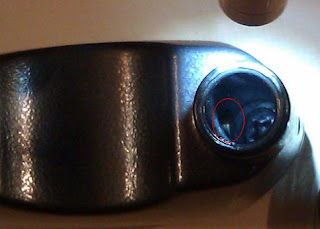 As you can see here the shackle has a recessed area on one side. If you insert it with the recessed area in the hole with the switch the alarm is not active. The contact is not pressed, the circuit is open. If you insert the side that does not have the recess cut the ball is pressed into the contact and the circuit is closed and the alarm is then active. 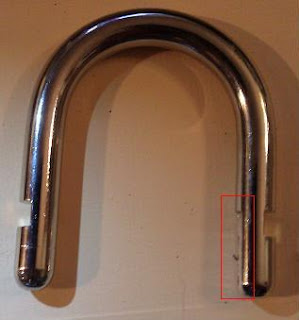 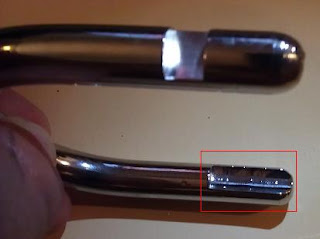 Here's the lock and the part the interacts with the shackle to prevent it's unintended removal from the lock: 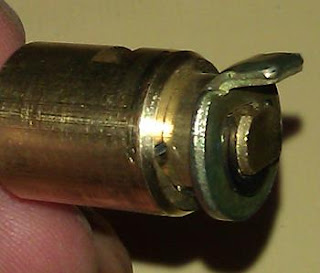 Insert the key and turn and the little wing there moves out of the path of the groove on the outside of the shackle.

On the product package it touts that the alarm has an "Anti-muffle design: alarm sound can not be concealed"

That, friends, is a lie.

Apply it to the lock as shown: 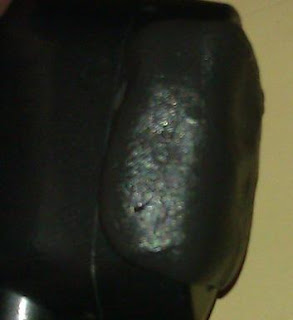 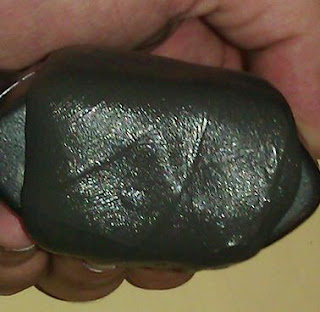 Once this is in place that lions roar of an ear shattering sound is reduced to a kittens squeak. It's completely tolerable. More along the lines of a kids toy buried under some stuffed animals than a rampaging 110 db alarm.

Part of the reason this works so well is that they've weatherproofed the lock so well to keep the internals dry. The only place loud sound can get out is at the vents on the bottom. VERY minimal sound can escape through the rest of the lock. Had they done a poor-er job of making it water tight you wouldn't be able to muffle it as well and that 110 db would be leaking out of everywhere.
They did one thing right, and it makes the lock worse.

I would feel comfortable picking this lock on a shed in someone's back yard while they slept in their house with the putty over the lock, there's no way they would hear it.

I haven't tried it yet, but I bet submerging the vents in water would also muffle the sound greatly. I also have an idea about using a paper clip to press against the speaker or puncturing the speaker, thus rendering the alarm function null and void. I'll do that later, after I'm done with the other experiments.

Alright so we now know we can muffle the sound. But what exactly does it take to set off the alarm, how sensitive is it? Well if I knew more about circuitry I could probably tell you. If anyone can give me some insight on the components on the circuit board that would be awesome, just leave something in the comments.

As it stands all I can do it just hit and shake the thing to see if it would go off. Given the lack of support I was receiving that night in my journey towards knowledge (did I mention that alarm is REALLY loud??) (Really really loud) (DAMN that thing is loud) I had to rig up a visual method to find out if the alarm was being tripped.

I got an old LED, a 9V battery connector, and some electrical tape and rigged myself up a visual alarm that would light the LED when the alarm is triggered.

Here's the video of me smacking it with a screw driver. Not very elegant, but I couldn't set the thing off by just shaking it in my hand, I had to hit it with something:


You actually have to smack it pretty hard, several times, to get it to go off, and it's kind enough to give you a 3 beep warning before it actually goes off. When it does go off it triggers the alarm for 10 seconds, then it automatically resets itself, I assume to save batteries.

So there you have it.

I have yet to get intimate with the lock itself but I hope that at least one part of this padlock is worth it's salt. As it stands I wouldn't use this thing to guard anything I considered valuable. I'm fairly certain if you stuck any key in the lock, or a sturdy tension tool, and turned it the pin holding the lock in place would give out and the whole thing would just fall apart.

I'll update this when I've laid bare the secrets of the lock itself.